Summary1)Fundamentals of Pathology by Hussain Sattar

Minimal Change Disease is the most common cause of nephrotic syndrome in children.

Pathophysiology2)Fundamentals of Pathology by Hussain Sattar 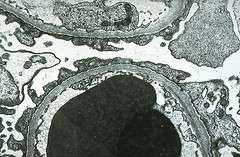 The pathology of minimal change disease is unclear and is currently considered idiopathic. The pathology does not appear to involve complement, immunoglobulins, or immune complex deposition. Rather, an altered cell-mediated immunologic response with abnormal secretion of lymphokines by T cells is thought to reduce the production of anions in the glomerular basement membrane, thereby increasing the glomerular permeability to serum albumin through a reduction of electrostatic repulsion.

The loss of anionic charges is also thought to favor foot process fusion. The etiological agent is somewhat of a mystery but viruses such as EBV, and food allergies have been implicated. Also, the exact cytokine responsible has yet to be elucidated, with IL-12, IL-18 and IL-13 having been most studied in this regard, yet never conclusively implicated.

Causes3)Fundamentals of Pathology by Hussain Sattar