Infant Respiratory Distress Syndrome or also known as hyaline membrane disease is a disorder in which the infant’s lungs produce inadequate surfactant, a protein normally secreted by type II pneumocytes in mature lungs. 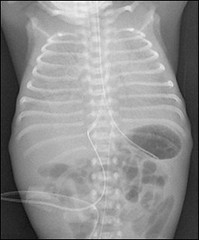 The lungs of infants with respiratory distress syndrome are developmentally deficient in a material called surfactant, which helps prevent collapse of the terminal air-spaces (the future site of alveolar development) throughout the normal cycle of inhalation and exhalation.

Pulmonary surfactant is a complex system of lipids, proteins and glycoproteins that are produced in specialized lung cells called Type II cells or Type II pneumocytes. The surfactant is packaged by the cell in structures called lamellar bodies, and extruded into the air-spaces. The lamellar bodies then unfold into a complex lining of the air-space. This layer reduces the surface tension of the fluid that lines the alveolar air-space. Surface tension is responsible for approximately 2/3 of the inward elastic recoil forces.

In the same way that a bubble will contract to give the smallest surface area for a given volume, so the air/water interface means that the liquid surface will tend toward being as small as possible, thereby causing the air-space to contract. By reducing surface tension, surfactant prevents the air-spaces from completely collapsing on exhalation. In addition, the decreased surface tension allows re-opening of the air-space with a lower amount of force. Therefore, without adequate amounts of surfactant, the air-spaces collapse and are very difficult to expand.