Summary1)Fundamentals of Pathology by Hussain Sattar

Central Diabetes Insipidus is a disease related to ADH deficiency. 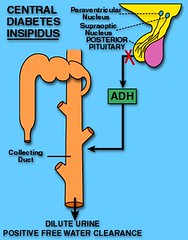 Neurogenic/central DI results from a lack of ADH; occasionally it can present with decreased thirst as regulation of thirst and ADH production occur in close proximity in the hypothalamus. It is encountered as a result of hypoxic encephalopathy, neurosurgery, autoimmunity or cancer, or sometimes without an underlying cause (idiopathic). The main effector organ for fluid homeostasis is the kidney. ADH acts by increasing water permeability in the collecting ducts and distal convoluted tubules; specifically, it acts on proteins called aquaporins and more specifically aquaporin 2 in the following cascade.

When released, ADH binds to V2 G-protein coupled receptors within the distal convoluted tubules, increasing cyclic AMP, which couples with protein kinase A, stimulating translocation of the aquaporin 2 channel stored in the cytoplasm of the distal convoluted tubules and collecting ducts into the apical membrane. These transcribed channels allow water into the collecting duct cells. The increase in permeability allows for reabsorption of water into the bloodstream, thus concentrating the urine.

Causes3)Fundamentals of Pathology by Hussain Sattar 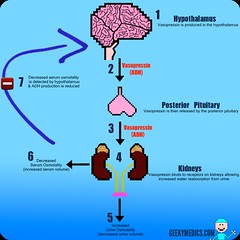 – Diagram of the normal regulation of urination (The Vet Blog)